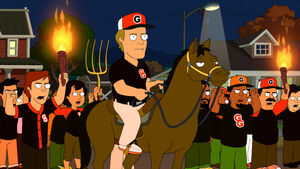 Robert Allen "Rob" Riggle, Jr. (born April 21, 1970) is a comedian best known for his time as a correspondent on The Daily Show with Jon Stewart and for his comedic roles in films such as The Hangover, The Other Guys, The Lorax, 21 Jump Street, The Goods: Live Hard, Sell Hard, and Step Brothers.

Retrieved from "https://cleveland.fandom.com/wiki/Rob_Riggle?oldid=28665"
Community content is available under CC-BY-SA unless otherwise noted.