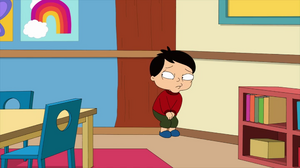 "Rice Pee Pee" is the physical attribute and racial nickname that Rallo gave one of his fellow students at Harper Elementary School in "Of Lice and Men". But the tables are turned when Rallo's head is shaved due to lice and he picks up the nickname of "Mr. Peanut" from his classmates.

Previously, he appeared in "Murray Christmas" singing at the Stoolbend Rest Home.

He was present at the handing over ceremony of Turt Russell in "Like a Boss".

He watches the school performance show in "Your Show of Shows".

He attends the Stoolbend Daycare Center reunion in "BFFs" and is seen on the playground in "Yemen Party".

He cries along with the other children when it appears Christmas is ruined when Arch bails out of being Grundle's Department Store Santa Claus in "'Tis the Cleveland to be Sorry".

Rice is part of the class as they are robbed and then stand up to bullies in "Grave Danger".

Rice joins the other kids in helping to save Cherry, "the magical giraffe" from the construction workers in "Crazy Train".

Retrieved from "https://cleveland.fandom.com/wiki/Rice_Pee_Pee?oldid=30000"
Community content is available under CC-BY-SA unless otherwise noted.