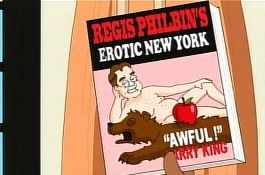 Regis Francis Xavier Philbin (born August 25, 1931) is an American media personality and occasional actor, known for fronting various talk and game shows. His trademarks include his excited manner, his New York Bronx accent, his wit, and irreverent ad-libs. He is most widely known for Live with Regis and Kelly, Who Wants to Be a Millionaire, Million Dollar Password, and for hosting the first season of America's Got Talent.

Retrieved from "https://cleveland.fandom.com/wiki/Regis_Philbin?oldid=24102"
Community content is available under CC-BY-SA unless otherwise noted.