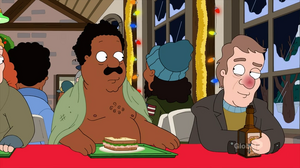 Reed is one of the residents at the Stoolbend Mission homeless shelter who can usually be found drunk and gets into a donated food fight with Cleveland during "I'll Be Homeless for Christmas" in "'Tis the Cleveland to be Sorry".

When Cleveland finds out that the homeless are getting gourmet food fixed by Stoolbend's top chefs, he passes himself off as homeless to get in on the goods. The shelter residents look after him after he spins a yarn about being a Vietnam vet but is caught when Donna nominates him as a Stoolbend angel for the work he claims he is doing at the shelter and is exposed on television.

After being shunned by the town, he finds the shelter residents still accept him as one of their own but that the food quality has returned back to normal after Christmas is over. Determined to raise awareness, Cleveland leads the residents back to Grundle's Department Store but they stumble across Kendra's over turned scooter where she was wrecked on the way to save Christmas for the kids. As they have trouble in the night gloom, Reed gives up one of his few moments of sobriety to take a drink and light their way with his nose.

Retrieved from "https://cleveland.fandom.com/wiki/Reed?oldid=31848"
Community content is available under CC-BY-SA unless otherwise noted.