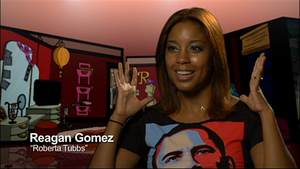 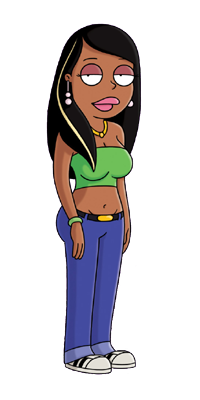 Reagan Gomez-Preston began her career in The Parent 'Hood, as Zaria Peterson. She guest starred on UPN's One on One (TV series) as Flex's younger sister/Brianna's Aunt. She also played Francine opposite Holly Robinson-Peete in the short-lived UPN sitcom, Love Inc. As well as being a former cast member of The Amanda Show.

She also appeared in music videos, "Sorry 2004" by Ruben Studdard; "No Better Love" by Young Gunz; & "Whatever You Like" by T.I.

She co-stars in The Cleveland Show as Roberta Tubbs, Cleveland's stepdaughter. Gomez replaced actress Nia Long, starting with "The Curious Case of Jr. Working at the Stool".

Retrieved from "https://cleveland.fandom.com/wiki/Reagan_Gomez?oldid=32017"
Community content is available under CC-BY-SA unless otherwise noted.