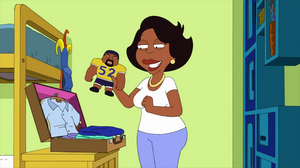 Ray Anthony Lewis, Jr. (born May 15, 1975) is a former American football linebacker who played in the National Football League (NFL). He played his entire professional career for the Baltimore Ravens which spanned 17 seasons from 1996 to 2013, and for the University of Miami in college.

When Donna tells Rallo that she packed his Ray Lewis plush doll for a sleepover at his father's house in "Grave Danger", Rallo insists that it is a plush action pillow.

Retrieved from "https://cleveland.fandom.com/wiki/Ray_Lewis?oldid=28042"
Community content is available under CC-BY-SA unless otherwise noted.