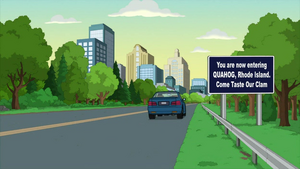 Quahog, Rhode Island is a fictional city in Providence County, Rhode Island where the animated television comedy Family Guy is set. The Griffin family, the Swanson family, and Glenn Quagmire live on Spooner Street. It was where Cleveland Brown lived prior to moving in the Pilot episode.

Retrieved from "https://cleveland.fandom.com/wiki/Quahog,_Rhode_Island?oldid=23232"
Community content is available under CC-BY-SA unless otherwise noted.