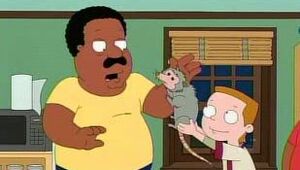 Princess is Ernie Krinklesac's pet opossum. (possum) Ernie bring Princess with him when he tries to move in with Cleveland and the family in "The One About Friends". While taking a nap in the shower, Princess is thrown at Cleveland by a startled Donna and is set on fire by Cleveland in an attempt to remove her from his crotch.

Retrieved from "https://cleveland.fandom.com/wiki/Princess?oldid=32509"
Community content is available under CC-BY-SA unless otherwise noted.