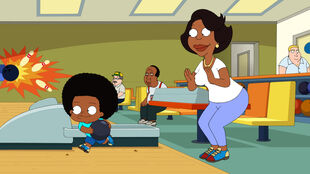 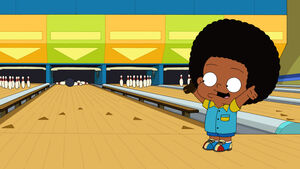 When Donna takes Rallo bowling she finds they have rails to keep the kids from getting gutter balls. But as she plays for real, he lets his success go to his head and she drops the rails when his bragging gets to be too much. As he gets a gutter ball, he is given a rude awakening. As Donna feels bad about what she had done, Rallo asks for the truth about what she has told him all his life and as she tries to gloss things over she fails and vows to only tell the truth, telling Roberta that her top makes her look cheap. As Rallo cleans off all of his artwork from the fridge, Donna admits that kids suck at everything. Rallo tries to find a way to prove he isn't a baby anymore as the other wives come looking for their husbands. Rallo volunteers to help but is turned down, being left alone as they go off to search for the guys. 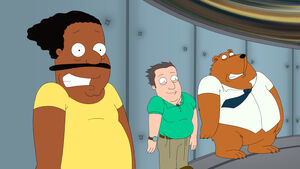 As Cleveland recounts the family's latest adventures, the guys complain that they are getting predictable. Cleveland proposes doing something unusual but they find skydiving and traveling to Paris won't do it for them. Seeking help, they are told their friendship is over. On the way home, they pass Funky Junction amusement park from one of their first adventures and reminisce. Cleveland returns but they find the park has closed and condemned. As they guys try to convince him that their days together are over, Tim rips the gate off the park and they gain access. Cleveland finds the power switch and they have free access to all of the rides. Riding the rotor, Lester starts the ride and after seeing the others having fun, jumps in as well, leaving no one to stop the ride.

Rallo goes to Sad Woody's Gentlemen's Club to enlist Robert Tubb's help. He is set up with a computer and tracks Holt's Facebook feeds to the park and gets a ride from Robert. At the park the guys fight and get sick on the ride. Robert drops off Rallo who finds the guys. He tries to turn off the ride but the control breaks. Rallo climbs onto a skyride to drop a rope but the ride breaks and leaves him dangling over the ride. Donna goes to the strip club as well but finds out from Robert where everyone is. Getting to the park, she finds Rallo who explains what happens and admits he isn't good at stuff. Donna tries to shut off the master power and starts a fire, nearly dooming them all until they are saved by the fire department. After getting chewed out for not leaving the rescues to them, Rallo saves a fire fighter and Donna from the falling letters F and U from the park sign and as the otherwise empty park burns, the Stoolbend Rest Home burns down with many casualties due to the fire department being otherwise occupied.

Retrieved from "https://cleveland.fandom.com/wiki/Pins,_Spins_and_Fins!?oldid=29876"
Community content is available under CC-BY-SA unless otherwise noted.