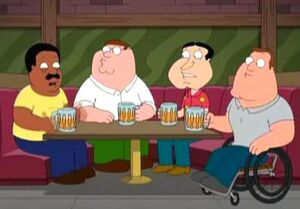 Peter Griffin was one of Cleveland's neighbors in Quahog. He appeared in the "Pilot" episode of The Cleveland Show, where he destroyed Cleveland's house, in Quahog, at Cleveland's leaving, Peter was most sad to watch Cleveland go. Cleveland also commented that whenever Peter wanted to do something, everyone was interested, but nobody cared about Cleveland. Also Peter was at Cleveland and Donna's wedding with his wife Lois,and his children Chris, Meg, and Stewie as well as the family dog, Brian. Peter is also the main character of Family Guy.

Peter also appeared at the end of "You're the Best Man, Cleveland Brown" alongside Glenn Quagmire who asks if he could have his own show, to which Peter replies that he is a rapist. Previously in the same episode, Cleveland Brown Jr. noted that a good chunk of his inheritance came from the wrongful death suit against Peter, causing him to take a series of funny jobs to pay the suit.

Peter visits Stoolbend to take part in Beer Walk in the episode of the same name.

In "BFFs", Cleveland begins to question the friendship between him and Peter when Peter briefly returns to Stoolbend to pick up Meg and does not call Cleveland to tell him he was in town. In a fit of anger, Cleveland drives all the way back to Peter's house on Spooner Street, while Brian and Stewie distract Cleveland to allow Peter to sneak away from Cleveland. Peter reveals that he just considered Cleveland as a drinking buddy and a neighbor, but not as a friend. But he has a change of heart when he goes to see a therapist, Bruce, and rescues Cleveland from being raped by a gang of rednecks with the help of the Evil Monkey.

Peter and Stewie both appear as Pez dispensers that Robert Tubbs collects in "Wheel! Of! Family!".

Retrieved from "https://cleveland.fandom.com/wiki/Peter_Griffin?oldid=30701"
Community content is available under CC-BY-SA unless otherwise noted.