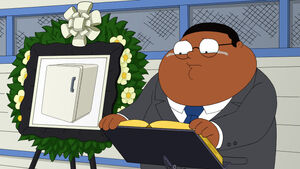 Perry is Cleveland Brown Jr.'s refrigerator. It often appears in his room where he keeps his own stash of food or when he tries to ration supplies for the family in "The Hurricane" until he takes offense to being accused of hoarding and locks it inside.

When he finds it dead in "Here Comes the Bribe", he gives it a complete furneral and burial. But when he later finds it in Rallo's room and thinks it came back from the dead, Rallo says that the outlet simply went bad, not the refrigerator. Junior demands his fridge back but Rallo refuses, pointing out that it is now legally his and appeals to Junior's sense of justice. Later, Rallo goes further and sets it up as a hotel-style mini-bar in Junior's room and intends to charge Junior for using it. Junior tries to resist by buying his own snacks but finds the trip to the store is more difficult that he imagined. Junior gives in and soon finds he owes over $1300. Rallo suggests he quit eating but the food seems to find Junior no matter what. Junior finds a loophole that the food isn't for resale and threatens Rallo with arrest without returning the fridge to his control.