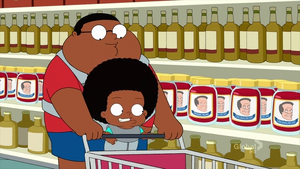 Newman was a co-founder of Newman's Own, a food company from which Newman donated all post-tax profits and royalties to charity.

In "Yemen Party", Cleveland Brown Jr. and Rallo spot jars of "Newman's Own Blood" at Stoolmart with Paul Newman's ubiquitous face on the label

Retrieved from "https://cleveland.fandom.com/wiki/Paul_Newman?oldid=18652"
Community content is available under CC-BY-SA unless otherwise noted.