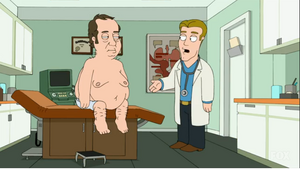 Paul Edward Valentine Giamatti (born June 6, 1967) is an American actor. Giamatti began his career as a supporting actor in several commercially successful and critically-acclaimed films produced during the 1990s including Private Parts, Deconstructing Harry, The Truman Show, Saving Private Ryan, The Negotiator, Cradle Will Rock and Man on the Moon, before earning lead roles in several projects in the 2000s including American Splendor, Sideways, Cinderella Man, Lady in the Water, The Illusionist, John Adams and Cold Souls.

Paul Giamatti appears in a cutaway when Cleveland uses him as an example of how poorly he feels in "How Cleveland Got His Groove Back". Giamatti is told by a doctor that his entire body needs replaced.

Retrieved from "https://cleveland.fandom.com/wiki/Paul_Giamatti?oldid=23780"
Community content is available under CC-BY-SA unless otherwise noted.