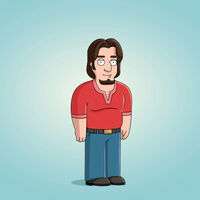 Paul is Terry Kimple's boyfriend who is first introduced in "Terry Unmarried". Cleveland and the gang decide to hang out at a new bar, before realizing that it is a gay bar. On their way out, they run into Terry and Paul, who reveal that they have been dating. Later in the episode, the couple travels to Vermont with Cleveland and Donna to get married.

He also appears in "Nightmare on Grace Street" at a Halloween party hosted at his and Terry's house. He is seen cuddling with Terry, and it is revealed that the two of them have a porcelain cherub collection.

Paul appears during "I Love L-A-T-I-N-O-S" at Choni's Cantina in "There Goes El Neighborhood".

Paul is voiced by Justin Timberlake.

Retrieved from "https://cleveland.fandom.com/wiki/Paul?oldid=25775"
Community content is available under CC-BY-SA unless otherwise noted.