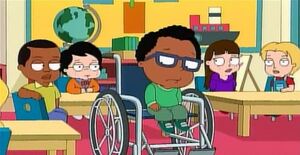 Gordon is a kindergarten student at Harper Elementary School in Rallo's class who is paralyzed from the waist down. In "Your Show of Shows", when Mrs. Lowenstein points out that their talent show has to be called a "Performance Show" because of expectations of talent, she singles out Gordon for the reason for change. Gordon later insults Rallo, Theodore and Bernard for their song about fiscal responsibility, but when they redeem themselves by singing an obscenity-laced song on Cleveland's cable access show, he says their lyrics inspire him to try to walk again, although he quickly realizes he still can't walk.

Gordon is voiced by Glenn Howerton.

Retrieved from "https://cleveland.fandom.com/wiki/Paraplegic_Gordon?oldid=29138"
Community content is available under CC-BY-SA unless otherwise noted.