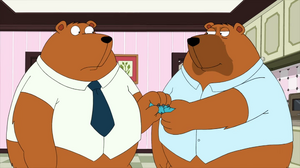 Tim said in "You're the Best Man, Cleveland Brown" that his father never forgave him for stealing Arianna away from him.

While smoking a cigar with the guys that Dr. Fist stole from his father 20 years previously in "Of Lice and Men", Tim complains that his dad made him get out of the river to poop. They later confront their fathers after getting Cleveland in trouble with LeVar Brown. Tim's father gives him his bow tie to show his approval of the guys standing up to their fathers, but declines to not sleep with Arianna anymore.

Retrieved from "https://cleveland.fandom.com/wiki/Papa_Bear?oldid=33121"
Community content is available under CC-BY-SA unless otherwise noted.