Once Upon a Tyne in New York 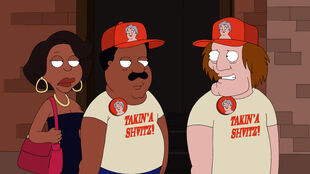 Cleveland Donna and Coach McFall at the Big Apple

Once Upon a Tyne in New York
Cleveland and Donna road trip to the Big Apple for an overdue honeymoon. 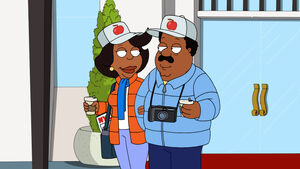 Cleveland reveals to his pals that he and Donna haven't yet taken their honeymoon and asks the gang for ideas. Coach McFall reveals his former fling with Tyne Daly in New York City. Inspired, Cleveland takes Donna on a road trip to the Big Apple, and to Donna’s dismay, Cleveland allows the Stoolbend gang to tag along while the kids are left with Terry. The next morning, Donna and Cleveland try to enjoy their time while the rest of the gang wander off, but the guys soon get into trouble and Cleveland must abandon the day's plans with Donna in order to rescue the guys. Cleveland tries to make it up by taking Donna to a Broadway show but its a cover for helping Coach McFall reunite with Tyne Daly. When Coach McFall actually meets Tyne Daly, they find his breakup wasn't exactly under pleasant circumstances. Frustrated with being neglected by Cleveland, Donna leaves and returns to the hotel bar. Rebuffing Cleveland's attempts to make up, Coach McFall tries to apologize and is so pathetic that Donna decides to help him. After a makeover, they meet Tyne after a taping of Saturday Night Live. When Tyne still doesn't want to hear from McFall, Cleveland and Donna hatch a plot to have him read from a monitor while they type in the words for him to read to Tyne. Cleveland's speech soon drifts into an apology to Donna and Tyne becomes more interested in McFall as well. They go their separate ways for a romantic night. Packing up to leave the next day, They find that Coach McFall has upset Tyne. They quickly leave New York. 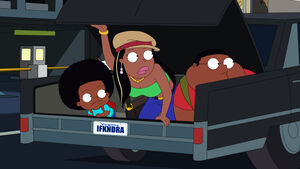 Meanwhile: Roberta, Rallo, and Junior decide they don't want to be left behind so they leave Terry while he is asleep and stow away on the trip so Roberta can get discovered as a star. When they get to New York, Roberta manages to convince a hotel clerk she is to appear on the Maury Povich show and gets them a free room. Roberta and the boys go to the MTV Studios to pitch her reality show "Roberta Rules," which is readily accepted. When they return the next day to begin filming, they find they have been the victim of a prank show called So You Think You're Pitching a Reality Show But You're Really Being Taped for a Prank Show!. Roberta is still happy to have been on television until she finds it has already aired and no one watched it. Dejected, the kids try to find their parents for a ride home. Just missing them, they are left behind.

Previous Episode /// Once Upon a Tyne in New York \\\ Next Episode