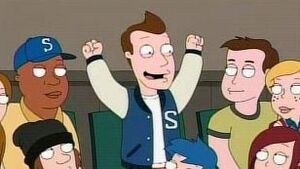 Oliver Wilkerson is a popular but deaf jock at Stoolbend High School. He is the captain of the football team, has a 3.8 GPA, and is a member of the Future Deaf Business Men of America. He runs for Student-Council President against Cleveland Jr. in "Ladies' Night", but later withdraws from the race after being saved by him. He is shown to lead the popular group of kids at school, and it is said in the same episode by Ernie Krinklesac that "there isn't a sport he hasn't lettered in and a girl that hasn't let him in".

Oliver has an interesting relationship with Cleveland. Because of Oliver's star sportsman status, he knows Cleveland as his baseball coach, and Cleveland has referred to Oliver as the "most popular and most sexually active kid at Stoolbend High" in "It's the Great Pancake, Junior Brown". However, this did not stop Cleveland from accompanying Junior in egging Oliver and his house in the same episode.

He was mauled by Sparky a bulldog owned by Lloyd Waterman in "Little Man on Campus".

He appears at the Halloween party in "Nightmare on Grace Street".

Oliver is voiced by Mike Henry.

Retrieved from "https://cleveland.fandom.com/wiki/Oliver_Wilkerson?oldid=31407"
Community content is available under CC-BY-SA unless otherwise noted.