Of Lice and Men 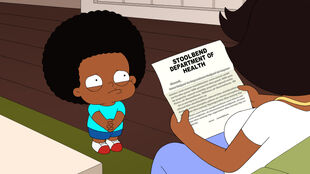 Of Lice and Men
Rallo has to cut off his afro after getting lice. 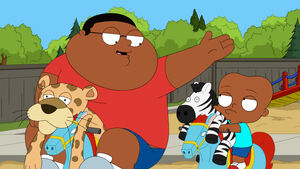 As Rallo gives a nickname to the new kid in school, a lice outbreak at school results in Donna finding out Rallo is infested. When her attempts to pick them out fail, she is forced to cut off his afro. When he is forced to face his classmates, he tries to camouflage his bald head with a wig but fails and picks up the nickname “Mr. Peanut.” He tries appealing to Donna but doesn't get any sympathy. He tries a series of hats but also fails to deflect his classmates teasing. As he mopes, Junior's perkiness surprises him and he learns Junior's secret for deflecting the constant teasing using his imagination. After some early reluctance he gets the hang of things and imagines himself in a space battle. After bonding with Junior, Rallo admits that he'll miss their adventures when his hair grows back, but as he sleeps, Junior shaves his head in the night to keep him bald.

As he is forced to play with Junior rather than face his friends, he begins to despair of his hair growing back. After Rallo faces more teasing from his friends, Junior is left with a hard decision of continuing to shave Rallo and decides to stop. Rallo awakens to find his hair is finally growing back and Junior agrees to let him out of a planned trip to a Wizard's restaurant as Donna yells about her missing shave cream. As Junior watches Rallo go off with his friends, Rallo gives him his stuffed zebra Roy that he used in his imagination to watch over. As Rallo decides to be nicer with his imagination, Junior takes off on another adventure in his mind. 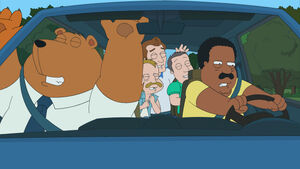 Meanwhile, Cleveland heads to his parents house to avoid the lice but when his parents head out to Legoland for the weekend, they leave Cleveland to house-sit. After Lester shows up and gets in, he invites the rest of the gang over despite the “no guests” rule. Their bonding gets out of hand when Lester gets into Freight Train's RC Cola and they go on a road trip to the store to get some more. But at the store, Big Boob June reveals that they haven't carried RC Cola for nearly forever and is pretty certain that they can't get anymore in Virginia and sends them on to Kentucky.

On the road, the guys antics start to wear on Cleveland's nerves and finds out the guys raided even more of the RC. After getting to the store and locating the RC, they get home just before Freight Train and Cookie arrive. Freight Train is upset about Cleveland having friends over and then notices that he is hiding something behind his back. Cleveland reveals he is holding a can of RC and as Freight Train prepares to give him a spanking, Cleveland tells off his father and gulps down the soda. Freight Train is faced by not only Cleveland but his friends as well, until he reveals that he has all of the other fathers backing him up too, after they were ratted out by a neighbor. As Cleveland and the guys cower as their dads approach, Freight Train hands him the belt for finally standing up to him and passes it on so he can beat his own son. The rest of the dads also pass on gifts to their sons and they all go to Freight Train's tree fort to drink RC.

Previous Episode /// Of Lice and Men \\\ Next Episode