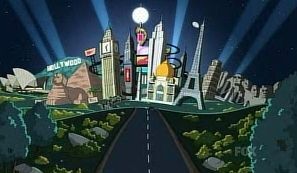 New York is the most populous city in the United States, and the center of the New York metropolitan area, which is one of the most populous urban areas in the world. A leading global city, New York exerts a powerful influence over global commerce, finance, culture, art, fashion, research, and entertainment. As host of the United Nations Headquarters, it is also an important center for international affairs. The city is often referred to as New York City or The City of New York to distinguish it from the state of New York, of which it is a part.

Cleveland and the gang visit New York City when he attempts to take Donna on a honeymoon in "Once Upon a Tyne in New York". Among the places featured in the episode are:

The skyline in Once Upon a Tyne in New York is actually patterned after the Las Vegas strip, which features the New York-New York Hotel & Casino.

Retrieved from "https://cleveland.fandom.com/wiki/New_York_City?oldid=23641"
Community content is available under CC-BY-SA unless otherwise noted.