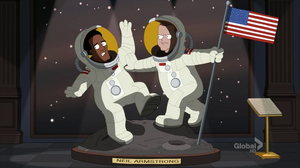 Neil Alden Armstrong (August 5, 1930 - August 25, 2012) was an American aviator and a former astronaut, test pilot, university professor, and United States Naval Aviator. He was the first person to set foot on the Moon.

A figure of Neil Armstrong is used in Rallo and Cleveland Brown Jr.'s Hall of Pretenders to show Federline other white men that took advantage of black culture in order to help him regain his confidence in "Brownsized". When Federline points out that Neil was really the first man on the moon, Rallo corrects him that Commander Dickey Darnell was and that black men had been on the moon since the 1930s.

Retrieved from "https://cleveland.fandom.com/wiki/Neil_Armstrong?oldid=31781"
Community content is available under CC-BY-SA unless otherwise noted.