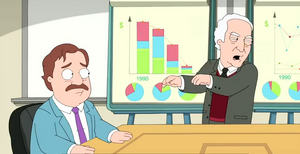 Myron is an executive of Fagltative Reinsurance Co-operative Underwriting Cleveland Brown Jr. sneaks into posing as an executive in "When a Man (or a Freight Train) Loves His Cookie", making small talk with Myron on his first day.

When the company president Mr. Oxnard hit him for a solution to boost the company's numbers during a meeting, Myron stumbles for an answer and is quickly cut off by Mr. Oxnard. When Junior comes up with a completely unrelated answer involving toys, Myron interprets it to Mr. Oxnard as a promotion involving toys with their insurance policies. Junior later tries to come clean, admitting that he hadn't even graduated yet after Mr. Oxnard offers him Myron's job despite having a child in a wheelchair at home. After the confession, Mr. Oxnard claims that Junior is still doing better than Myron who graduated from Harvard and offers Junior a job in the future.

Retrieved from "https://cleveland.fandom.com/wiki/Myron?oldid=26016"
Community content is available under CC-BY-SA unless otherwise noted.