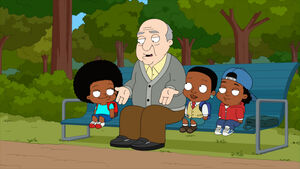 Murray is a senior citizen friend of Rallo Tubbs.

In "Murray Christmas", while performing in a class choir at the Stoolbend Rest Home, Rallo first observes Murray not paying attention and gets into a verbal battle of wits with him. When the home supervisor suggests they get to know each other better, Rallo’s teacher forces him to spend the weekend at a retirement home to get to know the senior citizens during the holidays. During this time, Murray teaches him about Hanukkah. In an attempt to rekindle Murray’s holiday spirit, Rallo helps him escape, but when his new friend’s health begins to suffer, Rallo has to decide whether or not to bring Murray back to the home. When Donna finds Murray's teeth in the dishwasher Rallo comes clean, which hurts Murray's feelings and trust. Rallo decides to go back to the home and free Murray and the rest of the residents for Christmas with the help of Cleveland Brown and Cleveland Brown Jr. In addition to Christmas at the Brown home with the rest home residents and Cleveland's parents, Rallo also treats Murray to the last night of Hanukkah.

In "To Live and Die in VA", when Donna declares it's time for Rallo to get another haircut, he decides it's time to quit getting his cut by his mother in the kitchen and go to a real barbershop. Rallo gets Murray to take him to his barbershop, where he soon picks up dirty jokes from the guys.

When Rallo and his pals Bernard and Theodore try to come up with an act for the school performance show in "Your Show of Shows", their idea for a karate act fails. They open up to Murray, who writes them a song about fiscal responsibility that bombs with the kids at school. Despite Rallo, Bernard, and Theodore's song striking out with the other students, the parents love it and Cleveland books them on his show. Backstage, Murray arrives with a new song to make amends for making Rallo and his friends outcasts with their classmates. It shocks the audience with its obscene lyrics, but it does result in getting the respect of their friends back.

In "Sex and the Biddy", Rallo tries to warn Murray that his new girlfriend, Hazel, is only into him for his money. However, Murray refuses to believe him. After they get married, Murray realizes that Rallo is right when Hazel has him recommitted to the retirement home and steals all his money, as well as his condo. To get back at her, Murray and Rallo, with some advice from Cleveland Jr., carry out a plan to drive her insane by planting cats everywhere she goes, even dressing up her own cat in a tuxedo, top hat, and monocle. The duo's plan is successful, as Hazel does indeed go crazy and social services is called.

Murry appears at Perry's funeral and at the ceremony when Cleveland and Donna renew their wedding vows in "Here Comes the Bribe".

Murray's picture appears on the cover of The Daily Splash newspaper after a fire at the Stoolbend Rest Home in "Pins, Spins and Fins!" as the otherwise empty Funky Junction amusement park burns down, the rest home also burns down with eighty eight casualties due to the fire department being otherwise occupied saving Cleveland and his friends and family.

Murray is seen at a funeral at the Stoolbend Cemetery in "Grave Danger".

Rallo and Junior observe Murry peeping in at a girls dormitory in "Crazy Train". They later rescue him from a rooftop when he falls asleep after waving his penis at police helicopters.

Murray is voiced by Carl Reiner.