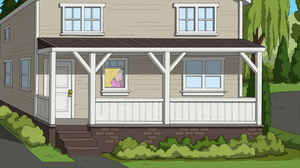 Mrs. Hickerson is the nosy neighbor that lives across the street from LeVar and Evelyn Brown.

Wen they go to Legoland for a weekend in "Of Lice and Men", they allow Cleveland to house sit with the instructions that he is not to have his friends over. The guys show up anyway and nearly get Cleveland in trouble by drinking his father's stash of RC Cola. Just as the guys are nearly finished replacing the soda, LeVar and Cookie show up, having been called by Mrs. Hickerson which annoys Cleveland who snarls that she needs to get laid.

Retrieved from "https://cleveland.fandom.com/wiki/Mrs._Hickerson?oldid=28222"
Community content is available under CC-BY-SA unless otherwise noted.