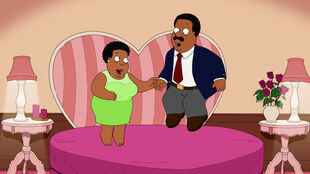 Mr. and Mrs. Brown
Donna gets angry when Cleveland and his mom are mistaken for husband and wife. 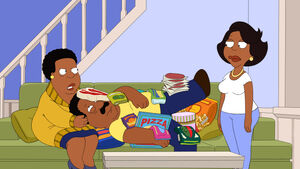 During a walk in the park, Rallo and Junior want candy but Donna has no money after spending the money they put in her purse. While Roberta is left in charge and decides to pay attention to other guys, Rallo snatches a candy bar.

Meanwhile, Cleveland decides to play football and gets hurt, making him feel his age. His parents over and ask him to take Cookie to tour a retirement community. On their trip, Cleveland is welcomed after showing off his strength and decides to take advantage of being the most fit man in the center. But when he accepts the resort's sports trophy, he and Cookie are mistaken for husband and wife. Cleveland keeps up the charade as they are accepted as members and are put up in the hotel across the street after having a few drinks. When they get home, he finds Donna with her mom and they tell jokes at Cookie's and Cleveland's expense. But when the Neighbors from the center stop by to invite them out, Cleveland blows off taking Donna to go with his mother. Upset, Donna tells him he should stay with his mother and he takes her up on it.

Cleveland goes to his mother to complain about Donna and they continue to bond until Cookie starts to get a little too personal for Cleveland's liking. When the time comes for them to go to the new members ball, Cleveland refuses and leaves his mother hurt. But after considering what he has done, he rushes to her side to find out she told of his death. The rest of the retirement resort finds out the truth and Cleveland comes to the defense of his mom and is accepted. Cleveland ten rushes to Donna side to find out from Dee Dee that she had left for the airport to start a new lift. Cleveland arrives late, but luckily Donna didn't have a passport. They make up as Donna jokes that she didn't have to run off with Freight Train, although when he peeks out from around a corner, she shakes her head, waving him off. 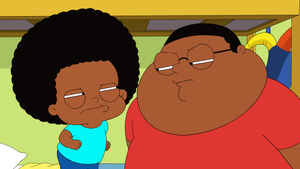 Donna catches Rallo with his pilfered candy and grounds everyone, although Roberta gets put in charge. Junior protests that he has never been grounded as Rallo tries to get him to pretend he is sorry but Junior refuses to apologize for something he didn't do. As the boys pass time, Roberta interrogates the boys and Rallo continues to lie and is released from punishment while Roberta has determined that Junior stole the candy although Donna has lost interest. While Rallo plays with his friend Walt, he starts to feel uncomfortable about his betrayal of Junior and gets himself punished again. But when he is placed in the room with a prison-hardened Junior, he is scared into telling the complete truth.