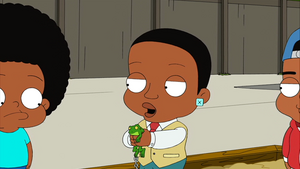 In "Flush of Genius", Bernard asks Rallo to take Mr. Ribbit with him to Krazy Kingdom to ride the Eliminator roller coaster to see of his eyes bug out from the altitude of the ride. When Rallo takes him to the park stowed in his Afro, he nearly gets to ride as the attendant pushes the measuring stick down into the Afro but still comes up as tall enough until Mr. Ribbit hops out, leaving Rallo a few inches short.

Retrieved from "https://cleveland.fandom.com/wiki/Mr._Ribbit?oldid=26833"
Community content is available under CC-BY-SA unless otherwise noted.