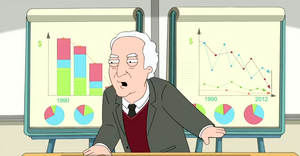 Mr. Oxnard is the president of Fagltative Reinsurance Co-operative Underwriting that Cleveland Brown Jr. sneaks into posing as an executive in "When a Man (or a Freight Train) Loves His Cookie".

When Mr. Oxnard hits the other executives for a solution to boost the company's numbers, they all stumble for an answers and are quickly cut off by Mr. Oxnard. When Junior comes up with a completely unrelated answer involving toys, Mr. Oxnard starts to point out that they don't make toys until Myron interprets it as a promotion involving toys with their insurance policies. Although Junior is hopeful for dolls, Mr. Oxnard sticks to his own idea of giving away rubber buses but gives Junior his own parking space as a reward. Mr. Oxnard later hosts a company picnic and Junior has to try to get Roberta and Rallo to pose as his family. But a family spat leaves Junior embarrassed in front of Mr. Oxnard and the rest of the office workers. The next day, Junior tries to apologize but Mr. Oxnard brushes it off, noting that he had problems with his own young black wife as well since she didn't want his brother to watch them. Junior comes partially clean, admitting that his persona hasn't even finished high school but Mr. Oxnard brushes it off, noting that he is doing even better than Myron who went to Harvard and offers him a job in the future. Junior asks for and gets to keep his desk until then.

Retrieved from "https://cleveland.fandom.com/wiki/Mr._Oxnard?oldid=26015"
Community content is available under CC-BY-SA unless otherwise noted.