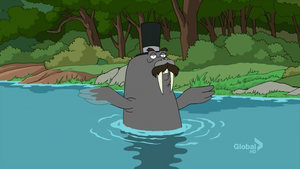 Mr. Flippers is a magical flying walrus that saves Cleveland Brown and the kids while tubing on a river in "Ladies' Night" during a "Scene Missing" part.

Inside the cable truck in "Gone with the Wind", Cleveland passes gas and Terry, who is covering his nose to not to smell the fart, falls off the road, but they are saved once again by Mr. Flippers.

Mr. Flippers fails to respond to Cleveland's cry for help when he and the guys go over a waterfall in "BFFs". Instead, Mr. Flippers is blowing rainbow smoke at hippies at a music festival.