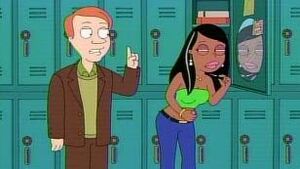 Mr. Armstrong is a teacher at Stoolbend High School. He takes anti-depressants.

In Love Rollercoaster, he shows himself to be smitten with Roberta's looks. When he realizes he has said something inappropriate, he hides in the ceiling. When a disguised Roberta in a fat suit tries to use her charms on him later, he responds by puking.

He is voiced by Mike Henry.

Retrieved from "https://cleveland.fandom.com/wiki/Mr._Armstrong?oldid=22883"
Community content is available under CC-BY-SA unless otherwise noted.