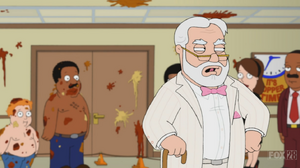 Miller M. Greene is the company founder of "Slop Poppers", Cleveland Brown's favorite snack. He went into the business after being fired from foreskin restoration.

When Cleveland gets into flame war with a child over who is the most knowlegeble about Slop Poppers in "All You Can Eat", the are engaged in a contest by the company to reveal the true champion. But when company founder Miller M. Greene gets word, he berates both of them for their slovenly habits and shuts down the plant rather than let others become like them.

Retrieved from "https://cleveland.fandom.com/wiki/Miller_M._Greene?oldid=31546"
Community content is available under CC-BY-SA unless otherwise noted.