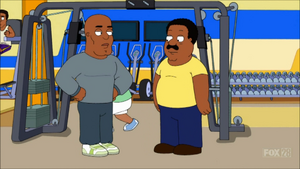 Michael Colyar is an American comedian and motivational speaker. He is mostly known as the heavy-hitting concert promoter "Showboat" in the 1994 movie, House Party 3. Colyar also spent his formative years as a comic, busking on Venice Beach.

Colyar is credited as the "Buff Man" in "Sex and the Biddy".

Retrieved from "https://cleveland.fandom.com/wiki/Michael_Colyar?oldid=18775"
Community content is available under CC-BY-SA unless otherwise noted.