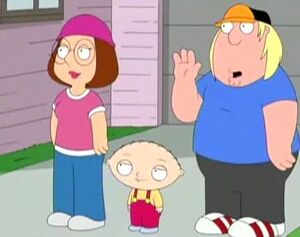 Meg Griffin is the oldest of Peter Griffin and Lois Griffin's 3 kids. She appears in the Pilot with her brothers, Chris and Stewie, when Cleveland first leaves Quahog and at Cleveland and Donna's wedding.

She appears in the opening credits of "A Cleveland Brown Christmas" being pelted with snowballs by the entire Brown-Tubbs family.

She is mentioned in "BFFs" when Gus the bartender at The Broken Stool claims that Peter left her behind during the "Beer Walk!". Gus thought that after a week he could keep her.

Meg is voiced by Mila Kunis.

Retrieved from "https://cleveland.fandom.com/wiki/Meg_Griffin?oldid=32501"
Community content is available under CC-BY-SA unless otherwise noted.