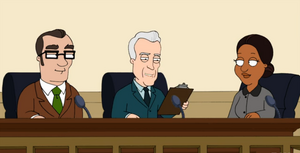 Larry Box is the mildly profane Mayor of Stoolbend, Virgina.

When Cleveland finds out about a plan to tear down the local drive-in theater in "The Blue And The Gray And The Brown", he attends a meeting at the Stoolbend Town Hall and appeals for them to save the drive-in. His efforts to preserve the town’s history is noticed by the Stoolbend Preservation Society and he is invited to attend a private dinner party at the home of the great-great-grandson of the town’s founding father, B. Emerson Plunkett V. The society uses Cleveland's enthusiasm to save a park and statue of the town father from being turned into a parking lot, only to find that he has been duped into protecting the legacy of a slaveholder by B. Emerson Plunkett V.

in "The Hurricane", Mayor Box admonishes those that ignored warnings to get out of Stoolbend in the face of the approaching hurricane while sitting in a hotel in Las Vegas.

Mayor Box plays the role of one of the hostages taken by Tim and his group of thieves in "Die Semi-Hard".

The Mayor pardons an entire turkey flock after they help save Rallo in "Turkey Pot Die".