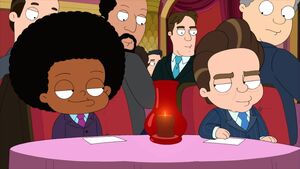 Marty Barty is a diminutive mobster who befriends Rallo, believing him to just be a guy with a tough attitude. Marty is voiced by Kevin Michael Richardson.

In "A Short Story and a Tall Tale", Rallo is tired of being treated differently due to his size and heads off to shop around on his own. He briefly gets into a tussle with Marty over the last miniature cart. Liking his spirit, Marty lets Rallo have the cart but Rallo gives it back admitting he has no money to shop with anyways. Rallo follows Marty around, amazed at his ability to buy alcohol. Rallo starts hanging out with Marty who takes him to the track and lets him drive his car. Enjoying Marty's lifestyle, Rallo fails to notice that Marty is actually a mobster. Marty asks Rallo to take out his unattractive sister Trish. After meeting at Cheese E. Charlie's, Rallo agrees to marry Trish but blows off the wedding to play with his friends. Upset at having been disrespected by Rallo, Marty gathers his mobsters and vows to kill Rallo. During a fight between Marty's gang and a group of NBA players who also want into the house to exact revenge on Cleveland for insulting them, Rallo shows up in the doorway. Marty sees him and chases him to his room. As he prepares to bash Rallo, Marty finds out that Rallo is only five years old. Feeling dumb for having made similar mistakes in the past, Marty and Rallo make up with Trish asking Rallo to call her when he gets older.

He is one of Hitler's officers in "Wide World of Cleveland Show".

Retrieved from "https://cleveland.fandom.com/wiki/Marty_Barty?oldid=31558"
Community content is available under CC-BY-SA unless otherwise noted.