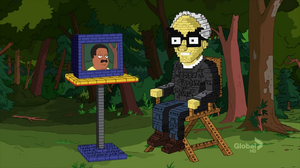 Dee Dee Tubbs brings a 16,000 piece Lego set of Martin Scorsese to Donna's huse for them to put together in "A Rodent Like This" despite Cleveland's objection that Donna simply forces the pieces together. When they are frightened by a rat in the basement where they are putting it together, Cleveland is fooled by its appearance into thinking it is the real Martin Scorsese.

At the end of the episode, Dee Dee kills the rat as Donna develops rabies, but Cleveland insists they need another take from the Lego figure of Martin Scorsese.

Retrieved from "https://cleveland.fandom.com/wiki/Martin_Scorsese?oldid=26696"
Community content is available under CC-BY-SA unless otherwise noted.