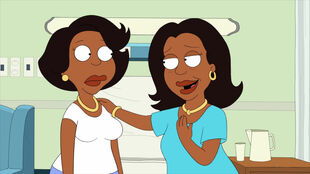 Donna and her mother Dee Dee. 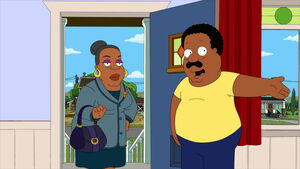 After Donna gets depressed at the mention of Mothers Day, Rallo explains that it's because Donna was abandoned by her mother. After reminiscing about how Auntie Momma took care of her, Cleveland offers to find Donna's mother. Going to Auntie Momma while she is directing a play, she admits that Donna's mother Dee Dee is completely disappeared but they decide to look together. After striking out, they go back to the playhouse and Cleveland gets the idea to hire an actress to play Dee Dee.

Things get off to a slow start, but when the fake mother spread on a thick story Donna buys it hook, line and sinker and the fake threatens to reveal the fraud if Cleveland says anything. At Rallo's Mother's Day recital, Donna plays her recorder for her mother but she drops over dead and Cleveland is forced to tell the truth. Depressed after Donna throws him out of the house, the real Dee Dee arrives at Waterman Cable demanding to know what Cleveland had been up to. 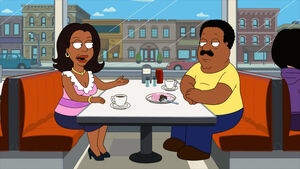 Dee Dee explains that the death certificate issued in her name messed up several aspects of her life. Cleveland wants to introduce her to Donna but Dee Dee insists that all she wants is to get her life straightened out and explains that she has too many regrets. Cleveland offers to show her to Donna without anyone catching on and Dee Dee agrees. Cleveland sets up an accident and Donna is introduced to her mother as a innocent victim. As they talk, Dee Dee tells of how she once had a successful music career in Germany but after giving birth couldn't give it up, so she gave her baby to her brother Kevin. Cleveland arrives and tells of how the stranger is really Dee Dee and Donna hits him, but she still makes up with her mother but is confused over being raised by Auntie Momma instead of her uncle Kevin until Auntie Momma arrive and they piece together the mystery.