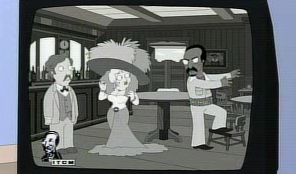 Mae West (August 17, 1893 – November 22, 1980) was an American actress, playwright, screenwriter, and sex symbol. Known for her bawdy double entendres, West made a name for herself in Vaudeville and on the stage in New York before moving to Hollywood to become a comedienne, actress and writer in the motion picture industry. One of the more controversial stars of her day, West encountered many problems including censorship.

Rallo and Roberta watch a 'classic' movie on 'Ike Turner Classic Movies' starring Ike Turner and Mae West in "Birth of a Salesman".

West is voiced by Aseem Batra.

Retrieved from "https://cleveland.fandom.com/wiki/Mae_West?oldid=24080"
Community content is available under CC-BY-SA unless otherwise noted.