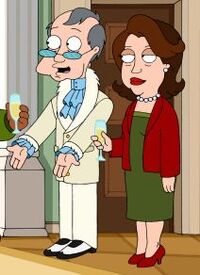 Lydia Waterman was the wife of Lloyd Waterman, owner of Waterman Cable. In spite their marriage, her husband is homosexual, having an infatuation with his employee Terry Kimple. She was mentioned in "Birth of a Salesman", but didn't appear until "A Cleveland Brown Christmas" at her husband's Christmas party.

She was a member of the Stoolbend Preservation Society in "The Blue And The Gray And The Brown" and part of Donna's women's group in "Yemen Party".

She helps with her husband hosting the veterans parade honoring Maurice in "Jesus Walks".

She is killed by her husband in "Who Done Did It?", although Cleveland is the original suspect until LeVar Brown proves his innocence.

She is voiced by Stockard Channing.

Retrieved from "https://cleveland.fandom.com/wiki/Lydia_Waterman?oldid=33249"
Community content is available under CC-BY-SA unless otherwise noted.