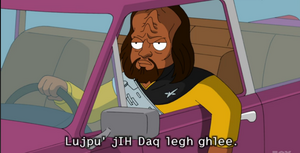 Lt. Worf is a fictional character from Star Trek: The Next Generation and Star Trek: Deep Space Nine. Worf was raised by humans after being one of the few survivors of an attack by the Romulans on a Klingon outpost. Worf would grow up to become the first Klingon to serve in Starfleet, reaching the rank of Lt. Commander.

Worf is shown waiting in traffic during the opening of "To Live and Die in VA" just as most other residents in Stoolbend, with his own private thoughts reflected in Klingon.