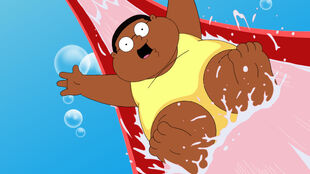 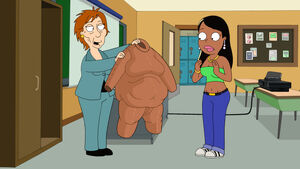 Cleveland Jr. is building a model rocket for the school science fair. Roberta's new teacher, Ms. Eck challenges Roberta to prove she can get by without her looks and has her alter her appearance by wearing a 'fat suit'. Her first day as 'Tyra' gets off in an inauspicious start when she is rejected by Federline and the teachers she previously had wrapped around her finger. Cleveland Jr. sees her alone in the cafeteria and warms up to her. When he shows her his model rocket, which is not only failing but is being outmatched by the geeks who are translating Klingon, she helps him with the design flaw. They win the science fair and Ms. Eck gives Roberta an "A" for proving she more than just looks. 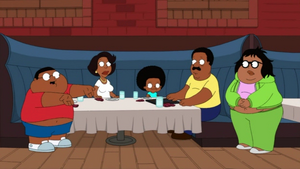 However, Cleveland Jr. falls in love with Roberta and when he tricks her into meeting the family while disguised as Tyra she has to admit her actions. Cleveland tells her she has to figure a way out of her predicament. She invents a story about moving to Alaska to avoid breaking Cleveland Jr.'s heart.

Meanwhile, Cleveland and the guys are impressed by Holt's new 'Nasal Laser' and set out to invent the next infomercial product. After bouncing ideas around they decide that a movable coaster for beers is just the item they need. The guys try to shut Cleveland out of his preferred name of the 'Roller Coaster' in favor of the 'Brew-Choo Train'. Cleveland decides to make their booth sign at the invention show using the name he prefers and is kicked out of the group. The guys show up they tell him the invention already exists and they are being sued. It turns out he saw an ad on late night television while high and had forgotten about it. He gloats at first about the guys getting stuck with the lawsuit until they reveal they never took his name off the invention and HE is the one being sued. He gets off due to some legal maneuvering but comes up with a new idea based on an invention he had seen earlier at the invention show. He is told he should lay off the weed.