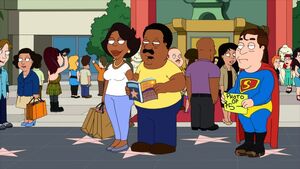 Cleveland and Donna visit the Los Angeles area in "A Short Story and a Tall Tale" for the NBA All-Star game. Before the game, they visit downtown LA, the beach, Hollywood and Beverly Hills before finding happiness in one of Southern California's marijuana stores.