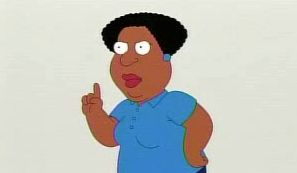 Loretta Marie Callender Brown was Cleveland's ex-wife, and the biological mother of Cleveland, Jr. In the pilot, Cleveland revealed that his divorce with Loretta was finalized. Loretta obtained Cleveland's house, but Cleveland got custody over Cleveland Jr. After the divorce, Cleveland Jr. was in denial, and never cried about the death of his mother. Cleveland cried over the death of Loretta because of survivor's guilt as Cleveland has fallen from his bathtub the same way Loretta did but was never even scratched.

Loretta's death occurred in "Gone with the Wind". She was killed when Peter Griffin accidentally dropped a brontosaurus skeleton onto her house in Quahog, and she fell out of the tub and broke her neck. She was later buried at the Stoolbend Cemetery. Len Stein later dealt with her will, which left all of Loretta's money to Cleveland, Jr. The will prevented Cleveland from learning how much money was being left to their son and stated that if Junior lent any money to his father, the entire estate would be transferred to Glenn Quagmire, who had an affair with Loretta causing the divorce. 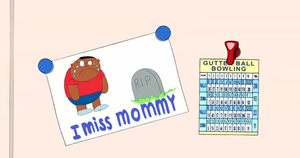 Cleveland Jr. would later admit that he lost his belief in God after Loretta's cheating with Quagmire in "The Hurricane".

Cleveland slips and starts to call Donna by Loretta's name in "Frapp Attack!".

Donna makes note of a drawing Junior has on the refrigerator in "Pins, Spins and Fins!". The drawing has him crying at Loretta's grave site with the caption that he misses his mommy. After she indicates the picture, Junior questions why no one has asked him about that drawing.