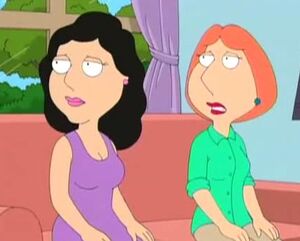 Lois Griffin is the wife of Peter Griffin and one of Cleveland's former neighbors from Quahog. She appears in the Pilot episode and ends up sharing a passionate kiss with Bonnie Swanson at Cleveland's request.

Cleveland has in his videotape collection one marked "Lois Sunbathing" in "The Essence of Cleveland".

She is also mentioned in "BFFs".

Lois is voiced by Alex Borstein.

Retrieved from "https://cleveland.fandom.com/wiki/Lois_Griffin?oldid=33370"
Community content is available under CC-BY-SA unless otherwise noted.