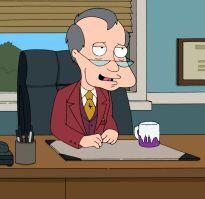 Mr. Lloyd Waterman is the owner of Waterman Cable who at first employs Cleveland as a telemarketer in "Birth of a Salesman". On the verge of being fired, Cleveland finds out he is attracted to Terry. He manages to parlay that into a job as an installer working with Terry.

Mr. Waterman is an incredibly wealthy man, able to hand out checks worth hundreds of thousands of dollars in "Field of Streams" and living in a mansion.

Mr. Waterman is often depicted as being slightly or sometimes bluntly racist. When he was first introduced to Cleveland, he was put off by his skin color, which he refers to as "hue". When he threw a Christmas party in "A Cleveland Brown Christmas", he hid his silver before the Browns arrived, and he offered Cleveland two free basketball tickets in "A Short Story and a Tall Tale" simply because he thought African Americans like the sport. He is not restricted to prejudices against one specific race, however; he also offered a Spanish employee a pick-up truck filled with "alley furniture" in the same episode.

Mr. Waterman is shot by Tim and his group of thieves in "Die Semi-Hard".

While Mr. Waterman fits the stereotype of a homosexual, there was doubt as to whether or not he has ever had a male-male relationship. Cleveland confirmed that he believes he is gay in "A Cleveland Brown Christmas" when explaining to Rallo why he has shirtless male waiters at his Christmas party. He owns a Sex and the City coffee cup, which he has delivered by his effeminate assistant. Interestingly, there is a "Mrs. Waterman", implying that Mr. Waterman was poorly hiding his possible homosexuality until he kills his wife and frames Cleveland in "Who Done Did It?". But when he tries to take off with his gay lover the coroner, they are caught by LeVar Brown and the family. This would be the last appearance of Mr. Waterman on The Cleveland Show.