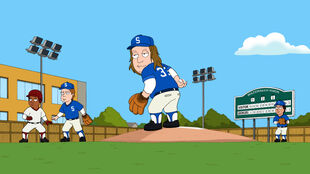 Holt in his baseball uniform

Little Man on Campus
Coach Cleveland gets greedy to win the high school baseball state championship game and turns to cheating when his star pitcher goes out for the season. 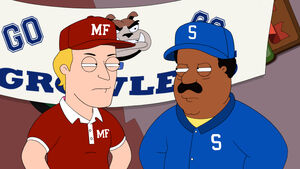 When the Stoolbend High School Growler's baseball team goes on a winning streak, the entire town starts looking forward to the State championships. But after Cleveland's old rival rubs his nose in costing him the championship game when they were in high school, Cleveland panics when his star pitcher Oliver Wilkerson is mauled by the mascot. Dejected, Cleveland is ready to throw in the towel until Holt proves to be an excellent pitcher and members of the baseball team mistake him as a kid due to his size. Cleveland decides to pass Holt off as a transfer student named Curt Colfax. The team continues its winning streak through to the championship but the gang find they have to hide Holt's role from Tim who wants his boy Raymond to play. After several attempts by Lester to knock him out with a shovel, Kendra runs over him with her scooter and Lester dumps Tim in the woods. Holt decides to give up baseball and join the musical theater group but Cleveland drags him back for the game. While Cleveland is helping Holt change into his uniform, Cleveland Jr. sees him and finds out about his dad's cheating. When Tim awakes, he hurries back to the game. Cleveland almost believe the game is up when Principal Farquhare pulls Ernie off the filed for failing to turn in his wood shop project. 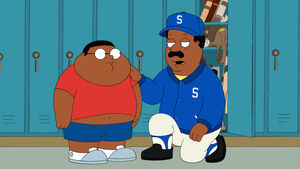 Meanwhile, Cleveland Jr. finds he is in danger of failing wood shop and is afraid of disappointing Cleveland. After seeing that his father has turned to cheating, Cleveland decides to replace his name on Ernie Krinklesac's resulting in an A grade. Cleveland finds out that he is the cause of Jr.'s misdeeds and pulls Holt from the game, replacing him with Raymond who is so stoned, he eventually throws a pitch that is knocked out of the park, costing the Growler's the game.

After Cleveland shows him that cheating isn't the answer he comes clean and gets an F but Donna uses her position as school secretary to change his grade to a "B".