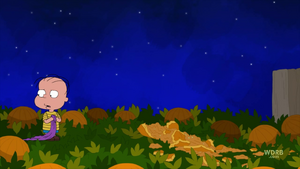 In "Mama Drama", Rallo watches a television special It's the Great Pumpkin Chris Brown in which an angered Chris threatens Sally Brown after she calls him a blockhead. Linus pauses to ponder who would leave their children in a pumpkin patch all night.

Retrieved from "https://cleveland.fandom.com/wiki/Linus_van_Pelt?oldid=22441"
Community content is available under CC-BY-SA unless otherwise noted.