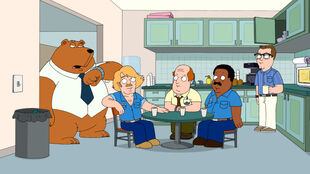 The Guys hanging out at work

Like a Boss
Tim lets a promotion go to his head. 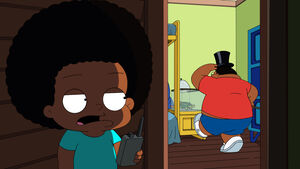 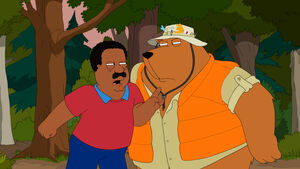 Plot: Cleveland looks forward to his big Superbowl party. At work during supervisor Tom's anniversary party after 25 years with Waterman Cable, he drops dead. At the funeral, Cleveland tries to convince Terry Kimple into taking the job so they could both benefit. Donna convinces Cleveland to try for the promotion himself and not play second fiddle to Terry. Mr. Waterman surprises them both by giving the position to Tim who quickly proves to be a taskmaster. To try to snuff out the flames of revolt, Tim fires Chad who discussed shooting up the office while demanding everyone else go on a work retreat which takes place during the Superbowl weekend. Nervous that Cleveland will show him up, Tim insists on them being partners during a scavenger hunt. When Cleveland refuses to help out, Tim panics when he finds that neither of them have a map to get back. It turns out that Tim is actually afraid of the woods which is why he lives in the city. Cleveland and Tim confront each other over their issues. They find out that it was their wives who both put them up to becoming supervisor in an attempt at a power play and decide to work together to get out of the woods. Just then, Chad arrives to shoot Tim in revenge for being fired. Cleveland manages to get Tim airlifted to a hospital and recovers in time for the Superbowl party. The epilogue reveals that Chad was acquitted for shooting Tim because he had a hunting license.

Meanwhile, Rallo gets to take home the class turtle. When Cleveland Jr. mistakes Rallo's talking to him on a monitor for the turtle speaking with him, Rallo decides to use it to his advantage, demanding money, stunts and for Jr. to do Rallo's homework. When Rallo finds the turtle missing, Cleveland Jr. tells him he put it in the storm drain because of it being mean to him. Rallo is forced to confess to Mrs. Lowenstein about losing the turtle where she reveals a drawer full of turtles and reports that every single turtle removed has never been returned. After admonishing Rallo that the turtle is really a lesson on birth control, she gives him a replacement.