Lester Krinklesac is one of Cleveland and Donna's neighbors in Stoolbend.

Lester is best described as a "redneck". He is apparently on friendly terms with his neighbor Donna, being at first concerned that Cleveland is stalking Donna in the "Pilot" but promptly apologizes to her when he realizes Cleveland was an invited guest. He becomes Cleveland's drinking buddy at The Broken Stool, where he also converses with Tim and Holt. He has stated that he will no longer insult black people, but he still has occasional relapses. He doesn't seem to be much of a good father, having weaned Ernie on root beer in "Field of Streams", but he does appear to care for his son. Despite his usually racist jokes, he is completely unaware of what KKK stands for in "Brown History Month", believing its his wife Kendra Krystal Krinklesac's initials and doesn't understand the symbolism behind the confederate flag, instead hanging it on the front of his house because it's signed by Rosco P. Coltrane of The Dukes of Hazzard.

Lester often visits Arnold's Whoreshack, and even has a jar set aside to save up money for it. He will sometimes bring his son with him, but makes him stay in the car. He has gone often enough to know the whores by name, and believes that One-Arm Mavis is reliable. Despite this, he does love his wife, as seen where he used a voice changer in "Love Rollercoaster" to pretend to be actor Alan Alda whom his wife was a huge fan of, and thanked her for all the fans letters she has sent. Even after doing so and with his friends looking at him in a confused manner, he states that he loves his wife, and doesn't mind if that makes him look fruity doing so. He is also willing to roleplay for her, occasionally dressing up in costumes shaped like giant food in "It's the Great Pancake, Junior Brown". Lester says he met Kendra through his father in "Ain't Nothin' But Mutton Bustin'; in fact, it is implied that the two are related.

In "A Brown Thanksgiving", Lester is seen at the soup kitchen with his family for Thanksgiving. This is not the first time his family has been tight in the food department. He describes one winter in "How Cleveland Got His Groove Back" that they were forced to live on nothing but skunk meat. Lester achieved this by covering his son in skunk urine and throwing rocks at the approaching skunks. This experience helped Lester when he pitched a strikeout against Cleveland to settle an argument.

In "California Dreamin'". Gina puts together an elaborate production of stand-ins including Tom Hanks for Lester to convince the Brown family that Cleveland has returned home from Los Angeles and they should do the same.

He has appeared in every episode except for "From Bed to Worse", "Brotherly Love", "March Dadness", "A Rodent Like This", "Squirt's Honor", "Mr. and Mrs. Brown" and "Crazy Train". He was only mentioned in "Brown Magic" and "'Tis the Cleveland to be Sorry" and was only heard in "Our Gang". In "Murray Christmas" he appeared only in the special opening. 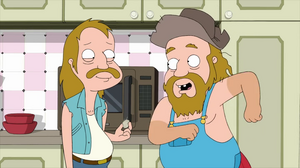