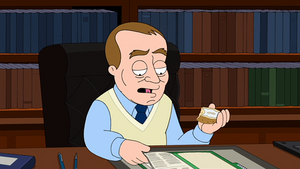 Len Stein is a Jewish lawyer that handles the will of Loretta Brown in "You're the Best Man, Cleveland Brown". He is employed at Stein & Sons Law Offices and seems to enjoy bagels. While he does rely on a strict interpretation of wills, he also seems to be easily bored by them, skipping over large parts of them and employing gimmicks such as employing Herbert to keep things interesting.

Cleveland calls Len after he is accused of a hate crime by Lester in "Brown History Month". Both Cleveland and Kendra Krinklesac refer to Len as a "bagel muncher."

In "American Prankster", he attempts to defend Rallo in court after he is arrested for distributing nude pictures of Cleveland Brown Jr.. Although it's later revealed that he is in on a prank by Cleveland to scare Rallo for his pranks.

Len accompanies Cleveland as he tries to apologize to the public for passing himself off as homeless in "'Tis the Cleveland to be Sorry" but points out every time Cleveland manages to offend a particular group of people including Native Americans, midgets, Interracial couples and pedophiles.

Donna reports from Len that Cleveland could be facing a fourteen-year prison sentence for the murder of Lydia Waterman in "Who Done Did It?". LeVar Brown would later prove Cleveland's innocence.

Retrieved from "https://cleveland.fandom.com/wiki/Len_Stein?oldid=27689"
Community content is available under CC-BY-SA unless otherwise noted.