LeVar "Freight Train" Brown is Cleveland Brown's father. He seems to have a cold shoulder for his wife, having broken up with her twice for a Waffle House waitress, and seems to strongly dislike his son, Cleveland, as he puts his own son down a lot. He joins his son and his new family for Thanksgiving and develops an infatuation with Donna's Auntie Momma. He even has sex with her, but soon finds out from Cleveland that Auntie Momma is a man. Afterwards he is persuaded into treating his wife right.

In "You're the Best Man, Cleveland Brown", Freight Train plans to remarry Cookie and moves back to Stoolbend. Cookie talks him into making Cleveland the best man, reminding him that Cleveland is his only son. LeVar has a sudden flashback of potentially dozens of children he may have been the father of but reluctantly agrees. Mere days before the wedding was supposed to take place, Freight Train met Robert Tubbs at Sad Woody's Gentlemen's Club and decided to make him his best man instead. While Cleveland was hurt by this at first, he later forgave his father and ended up walking with his mother down the aisle.

In "The Way the Cookie Crumbles", LeVar takes the heat for Evelyn getting scammed out of their home and endures teasing from Cleveland while living with them until he finally snaps and leaves, leaving Evelyn to explain what had really happened.

According to "March Dadness", Freight Train was given a tryout with the Washington Redskins but was cut after two weeks in favor of Cannonball Williams. Freight Train's anger toward Cleveland is also revealed to be the result of a very poor performance by Cleveland in a stunt game show.

LeVar turns 63 years old in "Hustle 'N' Bros.". After Robert Tubbs takes him to Las Vegas for a prize fight for his birthday, he adopts Robert.

LeVar appears in the Italian segment of "Wide World of Cleveland Show".

After Freight Train misses their anniversary to fool around with another woman in "When a Man (or a Freight Train) Loves His Cookie", Cleveland tries to help them patch things up by getting them concert tickets to see George Clinton and the P-Funk All-Stars. Cookie gets carried away and leave Freight Train for George. Freight Train tries to keep up his macho image but finally admits he loves Cookie and enlists Cleveland and his friends to help by having Tim maul the band so they can take their place on stage. Freight Train tells Cookie how he really feels in a song and calls all of his other girlfriends to break off their relationships. 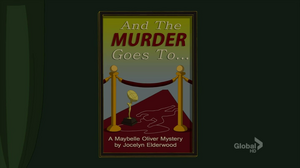 Cleveland reveals in "Hustle 'N' Bros." that LeVar writes mystery novels under the pseudonym of Jocelyn Elderwood. Freight Train's persona of Jocelyn would play a key role in helping Rallo and Junior try to prove their dad didn't commit a murder in "Who Done Did It?".

Retrieved from "https://cleveland.fandom.com/wiki/LeVar_Brown?oldid=33322"
Community content is available under CC-BY-SA unless otherwise noted.